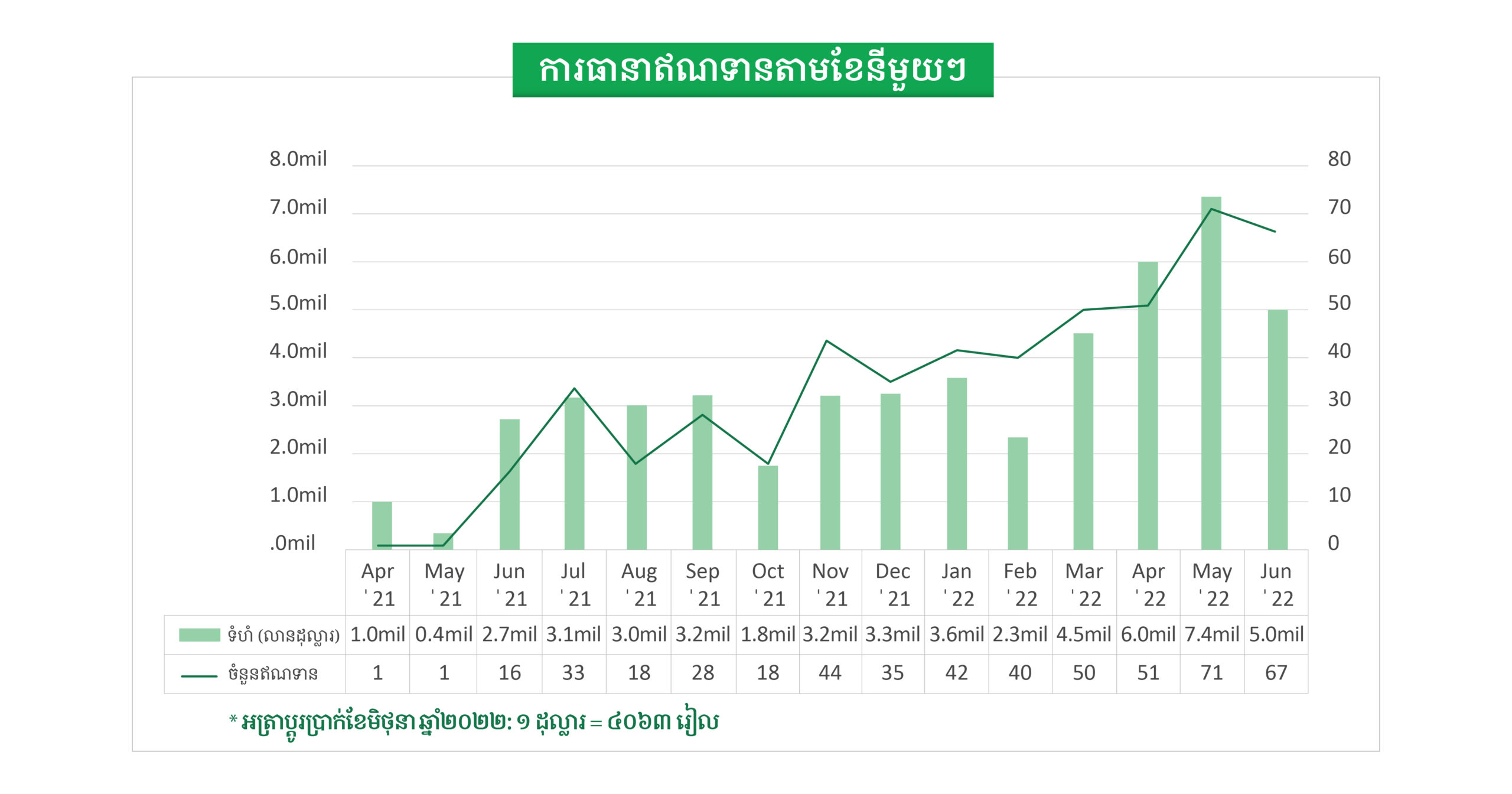 Credit Guarantee Corporation of Cambodia (CGCC) has issued 515 letters of guarantee for loans worth $50.5 million by the end of June this year since the launch of the credit guarantee scheme in March 2021, according to the CGCC quarterly newsletter.

Wong Keet Loong, CEO of CGCC, said that the scheme for the second quarter of this year showed a growth in both guaranteed value and number of letters of guarantee issued compared to the first quarter — increasing to $18.4 million from $10.3 million and to 189 letters of guarantee from 128.

“We are confident that the momentum will continue into the second half of the year. We will continue to support participating financial institutions who can reach out to more entrepreneurs,” said Wong.

In May of 2022 alone, $7.4 million loans were guaranteed for 71 businesses, according to the report, adding that this is the highest value of guarantees since April 2021. Of this, 412 letters of guarantee were for fixed-term loans.

According to the report, about 400 entrepreneurs used the loans as working capital and about 96 percent or 498 businesses availed an average of $100,000 each for the purpose.

About 75 percent, or 386 entrepreneurs, applied for the CGCC service without collaterals, the report pointed out, noting that the number of women entrepreneurs increased to 165 — availing 32 percent of the total loan — in June from 138 in May this year.

Entrepreneurs in Phnom Penh received 156 letters of guarantee, accounting for about 30 percent, followed by those in Battambang with 56, Kampong Cham with 34 and Kampong Thom and Siem Reap, 30 each.

“The coverage of credit guarantee grew nationwide through the networks and branches of the participating financial institutions. However, some remote provinces still need more promotion to raise awareness of the scheme,” the report said.

In the April-June period this year, Canadia Bank, Sathapana Bank and LOLC Microfinance Institution applied for most loan guarantees under the scheme which is operated with the technical and financial guidance of the Ministry of Economy and Finance.

Raymond Sia, CEO of Canadia Bank, said the commercial bank has provided nearly $20 million to over 200 customers under the scheme.

Canadia Bank has plans to provide more CGCC-guaranteed loans to both existing and new customers having good credit records and clear plan of loan usage.

“We believe that the credit guarantee schemes can help potential business owners who are in need of loans but do not have sufficient collaterals, especially for the recovery and expansion of businesses after the pandemic,” he said.

Wong had discussed issues such financial inclusion, financial literacy and risk weightage for guaranteed loans with the Director General of National Bank of Cambodia, Chea Serey, last month during a meeting attended by officials from both the institutions.